Something interesting I found out about PHP when processing huge files. The memory garbage collector doesn't always work the way it is intended and common tricks don't always work either.

What's even more frustrating is the common method of reading a file line by line causes huge memory leaks.
Here's my findings and solutions: (feel free to correct me if I'm wrong, even though it worked for me)

Common method fopen+fgets fails:
fopen() with fgets() to read line by line on files that contains almost a million lines will cause crazy memory leak. It takes only 10 seconds before it consumes pretty much 100% of the system memory and go into swap.
My solution:
use "head -1000 {file} | tail -1000" is much less memory intensive. The exact number of lines to process varies depending on the system speed. I had it set to 2000 and was running very smoothly.

My Solution
You can FORCE the garbage collector to run by wrapping a process in a function. PHP does clean up memory after each function call. So for the above code example, if re-written, memory will happily hover over 0.5% constantly.

Today, Google has changed the entire search experiences just for the Chrome. If you navigate to http://www.google.com, you'll get to see a slightly re-styled layout. But as you proceed on your search, you'll soon find out the search results are completely re-arranged, re-styled, and re-worked.

It looks like Google is taking a step up against Bing's decision driven search engine and also they took a step up in terms of user friendliness.
The left rail is now filled with search filters and options. The most used "Everything", "News", and "Maps" is very useful. I have finally gotten my hacked WoW account restored by Blizzard. After lengthy investigation and restoration, Blizzard's "specialists" were kind of enough to restore most of my items. They tried the best they can to restore all my lost gears and for other items, they simply gave me 2500g per level 80 characters plus 14 emblems of frost and 70 emblems of triumph to cover the loss.

I am very pleased by Blizzard's customer service quality, except the fact that their hotline was nearly impossible to call in. Everything got restored just in time for ICC.

Now the biggest challenge I'm facing is squeezing time out for playing WoW and I'm slowly getting cornered by other priorities in my life. Time has become extremely precious for me. With LA's traffic, by the time I get back home, it is already 7:30PM or 8:00PM. After dinner and playing with my son, there's pretty much no time left for anything other than going to bed. It has been a few days since I have even touched my game machine. Strangely, I don't feel sad at all. I do miss WoW, but I value activities with my family far greater than quality WoW time. Yah, there it is, I've said it and maybe one day I will quit WoW as well (that will probably be a while :p)
Posted by EpicGear at 10:07 PM 2 comments

One of the thing I really love Mac and Linux over Windows is the built in Terminal. Unfortunately, majorities of computer users are using Windows. For programmers who work for larger corporations are pretty much stuck with Windows.

When it comes to using SSH on Windows, there aren't that many great choices out there. The built in Command-Prompt just doesn't cut it even if Microsoft somehow manages to have ssh support directly built in.

Currently, I'm switching between PuTTY and mintty. Maybe once I have figured out how to overcome windows 7's permission restrictions, I would drop PuTTY completely for mintty.

Here is a list of popular SSH clients on Windows:

Posted by EpicGear at 9:19 PM 3 comments

This is a continuation of my older article PHP Memcache Extension - Lesser Known Pitfalls. Reader Tony pointed out a very strong statement I made regarding not to use memcache as PHP session storage.
I have to admit that was some strong statements I made when I was writing that post. Thank you Tony for pointing that out. :) I have since changed the wording a bit to not deny the all usages of memcache in replacement of session.

Here's a couple situations I think are not good ideas when using memcache as the primary session storage:

However, if the size of each session is controllable, growth of session data is foreseeable, and in case of failure, data is recoverable without triggering major disaster, I'm definitely pro on using memcache as the session storage. There are many ways to achieve this. Here's a couple ideas of mine:


All in all, I'm not opposed to any form of session storages as long as all sides of it are well thought out and planned out.

Things are just not heading towards North as I wished. Ever since I had my WoW account hacked, it seems like every little thing can turn South at the most unexpected time.

Just as I was trying to finish up the dev work on the three Chrome Extensions, my video card gave up on me. Sadly, I'm on a Dell XPS400 that was built 4 years ago and the video card is only a GeForce 6 series. I know, it's really a joke to most of  you guys. It's definitely a legacy video card now consider that it's only PCI-Express x16 without the buzzy word "2.0". I guess I should've replaced it when the fans started making noises....  Everything is too late now. It finally frozen up my screen and gave up on itself.

I'm actually writting this post from my wife's laptop which I'm not allowed to use for programming. It's a netbook strictly bought for her for reading online novels (those chinese love novels.... are they really that good?)

I have placed an order for a new video card, a GeForce 9800 GT, from newegg.com. It should arrive by tomorrow. For those of you who came from the support link on my extensions, please be patient. I'll be back on track in a couple days, promised.
Posted by EpicGear at 12:55 PM 0 comments 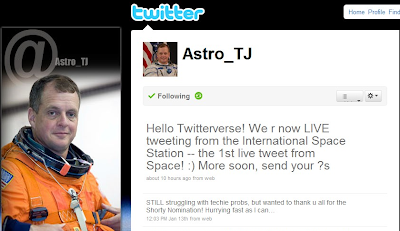 Just about 10 hours ago, Timothy J.(TJ) Creamer, a NASA Astronaut tweeted from the International Space Station. This marks as the 1st tweet from space.

According to the statement release today by NASA, "Astronauts aboard the International Space Station received a special software upgrade this week – personal access to the Internet and the World Wide Web via the ultimate wireless connection."

This personal Web access, called the Crew Support LAN, takes advantage of existing communication links to and from the station and gives astronauts the ability to browse and use the Web. The system will provide astronauts with direct private communications to enhance their quality of life during long-duration missions by helping to ease the isolation associated with life in a closed environment.


Ok, they don't have full access to internet all the time, but probably a few hours per day as the station orbits around the earth. Also, the access isn't directly through a dell/mac they brought with them, but rather through a computer on the ground which the astronaut will access using remote desktop. Still though, this is really cool. This gotta be the most interesting place to use twitter and marks the first step toward full internet access in space.

Now, here comes some fun facts from the statment: